The Northern Utah Type 3 Incident Management Team (IMT) is managing 10 separate fires that are part of the complex and supporting initial attack. They are: Davis, Two Springs, Onaqui, Rock Ridge, Little Valley, Lookout Pass 1 & 2, Faust, Chock Cherry, and the Knolls Fire. Each fire offers its own unique challenges and needs. Some are still actively burning while others are in mop up stages. The following information will offer a general picture of the Onaqui Mountain Complex.

Weather Conditions: Red flag warnings are in effect from 1100 to 2000 today. Hot (99), dry (11% relative humidity), and windy (6-10 mph with gusts up to 15mph) conditions will exists in the fire area. There is a slight chance of afternoon thunderstorms that could bring gusty erratic winds with it that may aid in fire growth.
Resources Threatened: Dugway and Terra are not threatened as the fire is moving away from these areas. Sage grouse habitat is threatened
Closures/Restrictions: None.
Yesterdays Activity: Weather conditions were favorable allowing firefighters to be aggressive in securing more line. State Highway 199 held strong keeping the fire to the south of it. The most active parts of the incident are on the southeastern flanks closer to the Onaqui Mountians where it is entering steeper country.
Todays Objectives: Crews will continue fighting the active portions of the wildfire with aerial and ground resources. A small number of engines, hand crews, and aircraft have been put on standby to support fires from yesterday evening’s lightning storm.
Remarks: Get the latest fire updates on social media by following Twitter/Facebook @UtahWildfire 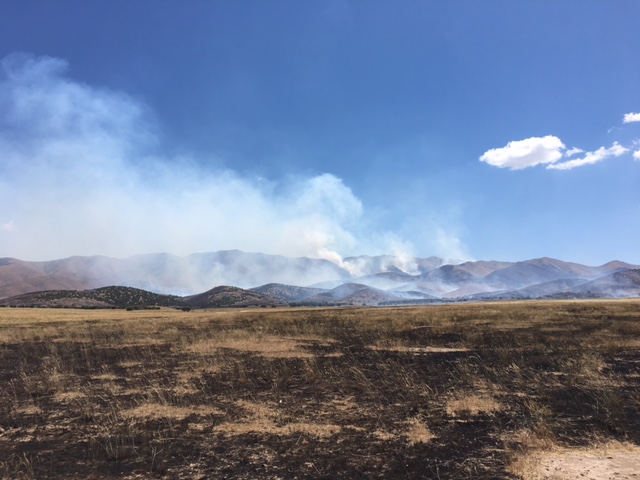