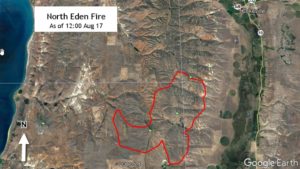 The North Eden Fire started the afternoon of August 16th. Fire crews from Rich County, Woodruff, Garden City, State of Utah and US Forest Service responded. During initial attack, multiple wind shifts drove the fire into dense grass plains which caused rapid fire growth that quickly outpaced firefighter efforts as the fire spread to the east. Two wildland fire engines were destroyed as their crews retreated to safety. A bulldozer was used to secure the west side of the fire and growth in that direction has been minimal.

Aircraft, including scooper planes, helicopters, single engine air tankers (SEATs), Heavy Air Tankers and a Very Large Air Tanker (VLAT) were put into use early on. The fire jumped roads and retardant lines and progressed eastward growing to 10,000 acres. By the evening, the fire reached the Wyoming and Idaho borders. At last estimate, the fire was approximately 6 miles from Cokeville, WY. Fire managers from Federal, State and Local agencies in all three states are coordinating the suppression effort. A type 3 team has been assigned to manage the fire and they will be in place starting tomorrow. 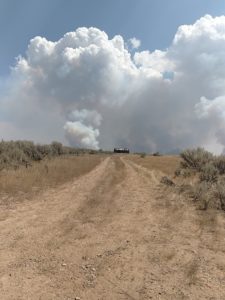 This afternoon (August 17th), the fire is 20% contained and has burned 14,000 acres of State and private land in Utah and BLM land in Wyoming and Idaho. Several power line structures have burned and crews from Rocky Mountain Power worked on repairs throughout the day today. There are a number of ranching operations and structures that are threatened. Fire managers are advising those near the fire area to be prepared in case a call to evacuate is made. No structures have been lost and no injuries have been reported.