MONTICELLO, Utah – The Bureau of Land Management will conduct a number of prescribed fires on public lands in San Juan County during the coming fall and winter months.  These prescribed burns help keep public landscapes healthy and productive by reducing the wildfire risk for adjacent communities, restoring ecosystem health and enhancing wildlife habitat.

Prescribed burns are planned for the following areas: 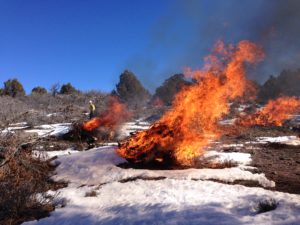 Fire and fuels specialists will continually monitor fire conditions during these operations.  Prescribed burns are only conducted under favorable weather and vegetation conditions for smoke dispersion and fuel consumption. Pile burning is normally conducted during periods of snow cover.  Smoke may be visible from adjacent highways and local communities during active burning and can linger for several days after.

Prescribed burns will be posted on https://utahfireinfobox.com. Local radio stations will be notified the day before burning begins.

For more information about prescribed burning or fire prevention, please contact Jason Kirks at the Canyon Country District Office (435) 259-2100.  Persons who use a telecommunications device for the deaf (TDD) may call the Federal Relay Service at (800) 877-8339 to ask a question or leave a message.  The FRS is available 24 hours a day, seven days a week, and responses are provided during normal business hours.

The BLM manages more than 245 million acres of public land located primarily in 12 Western states, including Alaska. The BLM also administers 700 million acres of sub-surface mineral estate throughout the nation. The agency’s mission is to sustain the health, diversity, and productivity of America’s public lands for the use and enjoyment of present and future generations. Diverse activities authorized on these lands generated $96 billion in sales of goods and services throughout the American economy in fiscal year 2017. These activities supported more than 468,000 jobs.