Summary: High humidity, cloud cover and late-in-the-day rain kept the Mirror Lake Complex mostly calm Sunday. The fires grew a total of 455 acres, mostly on the Murdock fire. As the fires grow, the containment percentage drops; however, the areas that have containment line around it remain secure. The Mirror Lake Complex is now 11 percent contained.

The Murdock fire is burning mostly within the Murdock Basin Canyon. As it burns, it is consuming standing dead and down lodgepole pines killed by beetles. As moisture arrives through the week, these burning dead trees will produce smoke; however, firefighters do not anticipate the fire’s footprint to get larger. As the fall days get shorter, cooler and more humid, the fire will burn less, eventually going out when it snows. Neither the Slate or Murdock fires are threatening structures or resources as they burn themselves out.

A transfer of command will occur October 2 back to the local unit. This transfer is taking place ahead of a significant rain event that will permanently moderate fire behavior. Firefighters from the Heber-Kamas Ranger District will take action on the Slate Fire if it moves to the north, threatening the Weber Canyon area or if the Murdock Fire moves east, threatening the Mirror Lake Highway. With the anticipated rain and the containment work already complete, the fires should not move.

TODAY, October 1 will be the final Mirror Lake Complex Update unless significant activity occurs. Smoke may be visible along the highway for the next several weeks. Signboards along the Highway ask visitors NOT to report the fires.

Weather: Moist air from the leading edge of the former Hurricane Rosa is making its way into Utah. It brings thunderstorms, high humidity and rainfall amounts up to three inches. Flash flood warnings are in effect for the fire area.

Today: Heavy helicopters are dipping from the Mirror Lake to drop water on the western flank of the Murdock Fire. Forecasted rain through the week will replace this effort. On the southeastern flank, the fire reached Pinto Lake, located on the far boundary of the Ashley National Forest. On its northern flank, heavy helicopters were able to keep the fire 1.5 miles east of the Mirror Lake Highway where smoke is still visible. The fire is contained on its southern flank and the Rocky Cliffs of Murdock Canyon are containing the fire on its north and eastern flanks.

The Slate fire experienced little growth over the weekend, despite strong winds that tried pushing the fire to the northeast. Located in steep rocky slopes that have sparse vegetation, firefighters do not expect the Slate fire to move significantly in the days ahead. Additionally, firefighters successfully contained the north flank, preventing the fire from moving north into Weber Canyon.

National Forest Trail and Road Closures are in place. See the area closure map for a description of this area: https://inciweb.nwcg.gov/incident/article/6223/48368/ 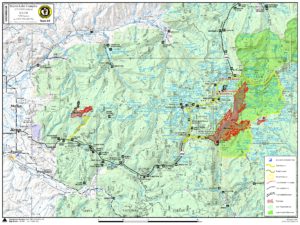